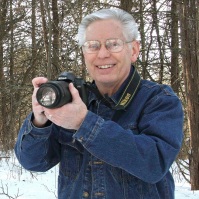 Tim Eisele (pronounced eyes-lee) is a full-time freelance outdoor writer and photographer based in Madison, Wisconsin. He has freelanced outdoor articles for The Capital Times, Wisconsin State Journal, Milwaukee Journal Sentinel, and Wisconsin Outdoor News and other newspapers, and for 12 years was the editor of Woodland Management magazine for the Wisconsin Woodland Owners Association.

He is a founding member, three-time past-president and past-board member of the Wisconsin Outdoor Communicators Association; is an active member of the Outdoor Writers Association of America; he served two years on the Board of Directors of the Wisconsin Wetlands Association, completed a six-year term as a member, and secretary, of the Board of the Friends of the UW-Madison Arboretum, and served on the Advisory Council of Trees For Tomorrow in Eagle River.

He currently serves on the Board of Directors of the Natural Resources Foundation and on the Board of Governors of the Wisconsin Conservation Hall of Fame.  He is also a volunteer instructor for Conservation Leaders for Tomorrow, to train students majoring in natural resources about the value and role of hunting in conservation.

Eisele holds Bachelor of Business Administration and Master of Science degrees from the University of Wisconsin-Madison, with a major in Environmental Communications.  His master’s thesis, “Wisconsin Waterfowl Hunter Attitudes on Regulations and Management Policies,” was presented to and published in the Transactions of the 38th North American Wildlife and Natural Resources Conference in Washington, D.C.

He worked for the Wisconsin Department of Natural Resources in Information and Education in Madison from 1971 to 1976 and as the West Central District Public Affairs Officer in Eau Claire from 1976 to 1978.  He worked for the CUNA Mutual Insurance Group, as a writer and editor, and then as Assistant Director of its National Association for Retired Credit Union People (NARCUP) from 1978 to 1997.  NARCUP provided membership services to 150,000 retired credit union members nationwide.

In 1994 he was invited by the director of the U.S. Fish and Wildlife Service to serve as a judge for the Federal Duck Stamp contest.  He now presents a power point program titled “Ding’s Darling” to conservation organizations, to inform people of Ding Darling’s conservation messages and the successful Federal Duck Stamp program and its importance to wetlands.  His second power point presentation is “From Weeds to Wild Flowers on Gobbler Ridge” showing the steps involved in restoring prairie on the Eisele woodland.  All of the photos of wildlife and vegetation are from his land. He has also served as a judge for Wisconsin duck, turkey and pheasant stamp contests.

Tim, and his wife Linda, own and manage 100 acres in Crawford County to benefit wildlife, and they were selected as the Wisconsin Chapter of the NWTF Wild Turkey Woodland Owners of the year in 2005 for their work to improve habitat for wildlife and improve biodiversity.  They have restored 8 acres of prairie, planted native shrubs, and conducted clearcuts to regenerate oak and aspen.

Many of Eisele’s articles involve: people who are involved in land management, to encourage private land managers to be good stewards of the land; highlighting long-time conservation volunteers (For many years his first column of each year was “Two Who Care,” featuring two local people who volunteered on behalf of conservation causes); and the need to return the appointment of the DNR secretary to the Natural Resources Board.

Tim is married to Linda, who retired in 2012 from working to ensure that child care organizations in Madison meet quality standards.  Their son, Shawn, is a graduate of the University of Chicago, and of the law school at the University of California- Berkeley.  In 2010 Shawn clerked for the Alaska Supreme Court; he then worked for Earthjustice, an environmental law firm in Juneau, Alaska, and is now executive director of Discovery Southeast, a nature education organization in Juneau, Alaska.